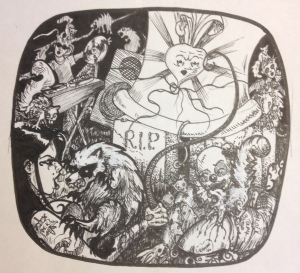 Pumpkins are not native to Europe, so the first jack-o-lanterns were carved from turnips instead of pumpkins. -Box of cheap pumpkin spice tea

The last warm night of Indian summer, red leaves fell like confetti on the classic horror film festival of Mistress Portia and Balthazar the Pain Clown, held at the old cemetery in Crown Hills.

The town’s spooky elite huddled on skull print blankets between graves, passing brown-bagged bottles back and forth.  All were clad in variations of black upon black.  In the background played something by KMFDM that everyone’s heard a million times.

The music stopped and the crowd fell mute when she stomped on stage.  The height of her boot heels would be the envy of any stilt performer.  Ropes of long black hair whipped at her thighs.  Cleavage blossomed from her apple red corset dress.

She blinked regally as she spoke, “Hello all.  Welcome to the Crown Hills Cemetery classic horror film festival.  On behalf of myself and Balthazar the Pain Clown, I welcome you.  As you know, I am Mistress Portia.  That’s Por t-i-a, like the spider, not the car.”

She gestured behind her to the DJ table, “Let’s all give it up for Ivan Mannhard, Crown Hills’ premier industrial DJ!.”

The crowd clapped.  The fellow behind the DJ table shook his weave dreadlocks.

Mistress Portia continued, “Our first film tonight will be the 1973 cult sensation Cheerleader Killers From Mars.”

“Ooh… I’ve never seen that one,” said one Goth.

“So obscure,” said another.

“I’ve seen it like, five times,” said Shelley the blue-haired terror.  The one who’s infamous for making out with your boyfriend, and renowned for her tattoo designs, though she’s much too wimpy to ink anyone herself.

“Five times?  Like hell you have!” said Squeak Monroe, kneeling by Shelley on a skull print blanket between two crumbling grave

Shelley boasted, “I happen to be the owner of Crown Hills’ largest and scariest horror film collection.  I’ll let you come over and watch a few, if you’re lucky.” She tossed her blue hair and thrust her chest out, but Squeak’s eyes were elsewhere, fully fixed on Mistress Portia as she loaded film into the vintage 70’s projector.

Balthazar the Pain Clown, in his white-faced glory, wheeled a screen across the stage and unrolled it.  Though it was a mild October, he wore a fitted vinyl shirt with long sleeves to conceal the slug-like ripples of knife wounds layered for years upon his flesh.

The film began to flicker as fall’s first cold wind blew on the cemetery, causing the Goths to huddle closer.  On a skull print blanket, Squeak Monroe put his arm around Shelley, and she did not remove it.

Legend states that the first or last one buried in a cemetery is stuck with the job of cemetery guardian, bound to keep eternal watch over their neighbor dead.

The first one buried in the old cemetery in Crown Hills was a crooked mayor called Straussman who didn’t look after his people in life, and certainly wouldn’t do so after death.

And the last one buried there was a turnip.

On screen, a gooey alien chased a cheerleader down a flight of stairs, and into a dingy basement, where he proceeded to chop at her with a laser space ax.

Just as the cheerleader’s head disconnected from her buxom frame and rolled in a bloody trail across the basement floor, the audience saw it: the glowing orb against the projection screen, almost a heart shape, with leaves and a stem, and a glowing lantern face carved of geometric shapes.

It was the Turnip.

“Goths behold: I am the cemetery guardian!” the vegetable spoke, spitting seeds into the crowd.  Several vampiric princesses fainted.

A dominant female voice called over the speakers, “Attention my esteemed guests.  This degenerate turnip will not ruin this classic horror film festival!”

The Turnip’s lantern face glowed red.  Mistress Portia stood before it, flung her arm back and whipped it the way she whips only the most insolent slaves.

“Huh huh huh!” the Turnip laughed.  “You cannot whip the ghost of a dead vegetable!”

Balthazar the Pain Clown appeared on stage with a suitcase of daggers he sticks into his own skin during his pain show.  He tossed the daggers in handfulls at the offending Turnip.  They sliced through the transparent orb, through the crunchy October air, landing on the grass.

“Huh huh huh!” the Turnip laughed.  “You cannot puncture the ghost of a dead vegetable!”

One flying dagger plunked firm into the Mohawked scalp of Squeak Monroe.  Bright blood ran down his forehead, to his pelican nose.  He let out his characteristic squeak, and in an uncharacteristic act of bravery, yanked the blanket from beneath Shelley and and charged towards the Turnip.  With a parachute sweep of his arms, Squeak tried to catch the Turnip inside the blanket.  Like the daggers did, the blanket sailed right through the transparent orb.

The Turnip’s lantern face glowed red once again as it let out a high-pitched rodent chitter.  An army of undead squirrels and raccoons rained from the cemetery trees to do the Turnip’s bidding.  With eyes red and mouths foaming, they ravaged the remaining Goths, chewing through velvet capes and vinyl pants.

On screen, another cheerleader was hacked to bits by an alien space ax.  In the cemetery, the Goths were a similar mess of shredded tattooed skin, helpless beneath the fangs of the zombie rodents.

Squeak Monroe seized a package of cookies from the skull print blanket where he’d sat with Shelley, and scattered them onto the lawn.  A pair of squirrels untangled themselves from Shelley’s purple hair, dashing towards the cookies with a vicious chitter.

“You saved me!” Shelley swooned and fainted into Squeak’s arms.  His toothpick legs buckled in their boots.  The two Goths collapsed together in front of a grave with a weeping angel on top.

But cookies were not enough to divert the entire undead rodent army.  The world’s largest raccoon was attempting to wrestle Balthazar, cleverly avoiding each jab of the pain clown’s daggers.  The world’s tiniest raccoon was swinging from DJ Ivan Mannhard’s weave dreadlocks, with the DJ swatting at it frantically.

Squirrels chewed through the movie projector cords, causing the slaughtered cheerleaders on screen to bend in funhouse shapes and scream with distorted voices.  Small fires erupted around the stage as more and more squirrels attacked electrical equipment.

“Rain!  It’s the only thing that could save this burning horror film festival,” exclaimed Mistress Portia.

Thunder drummed in the heavens.  Lightening flickered like the projection screen.  Raindrops tapped the gravestones.  The Turnip’s army of zombie rodents sizzled and melted as the rain wet them.    “Mistress, you have summoned clouds!” Balthazar cheered.

“No, boy of dough, it was me.  Mayor Straussman, the first to be buried here at Crown Hill Cemetery, and thereby the true Cemetery Guardian.”  The voice came from a statue of some bearded old-time jerk just to the right of the stage.

The mistress answered, “We heard you didn’t care about your people while you were mayor, and made selfish decisions that left them with bad living conditions.”

“It’s true, I didn’t give two tiddlywinks about anyone while I was mayor of this cow town, and I don’t give two less than that now!  So resume your celebration.  I honestly don’t care.”

“Over my dead vegetable body,” growled the Turnip, flashing each time the lightening struck.  “I am the Cemetery Guardian, and I declare no intruders are to screen sub-par horror films here.”

“It looks like the Turnip needs light in order to take physical form,” the Mistress noticed.  “Stop the lightening, Mayor!”

The lightening stopped.  So did the thunder, the rain and the Turnip.  But it was a victory overdue.  Platform boots squashed puddles of molten rodent goo as Goths stampeded toward the light beyond the iron cemetery gates.

Mistress Portia cried to the crowd, “Wait, everyone.  Don’t leave!  The Turnip is gone!  We can resume our festival.  By order of the mistress, return to your skull print blankets!”  No Goths turned around.

“I think most of them are kinda bloody, like from zombie raccoon bites.  We can try again next Halloween,” Balthazar the Pain Clown reassured, placing a scarred hand on Mistress Portia’s corseted back as the two of them wove around graves to the light just beyond the gates.